A year ago today, my budgie Cookie passed away.

Although I've had other pet budgies when I was younger and loved them all, I don't remember the exact date of their passing.  But with Cookie I do, because he was special.  And because it was 5 days after my birthday last year.  Even now, there isn't a day that goes by that I don't think about him.

I first met Cookie in early 2003.  I had just moved to Phoenix and was not employed at the time -- I'd decided to give myself the luxury of having a few months off to work on my personal art and get to know my new city before jumping into a new job.  Since the last place I lived didn't allow pets, I really wanted a pet bird.  Cookie was at a local pet store that specialized in birds.  He was the only budgie they had at the time, and was alone in a cage.  At first he flew away from me, but then sat on my shoulder.  That was it -- I decided to take him home.

Having no idea if he was a male or female (males usually are better talkers), I nevertheless decided to try to teach him to talk.  Since I was home all day, I took him out of his cage several times a day, put him on my finger and repeated his name to him.  Initially, he just gave me a blank look, as if to say, "What is this giant stranger saying to me??"  But I persisted, repeating this exercise every day, several times a day.  After two months, my husband (who had never been around pet birds before this) quipped, "Is that bird ever going to talk?"  He seemed skeptical.  I ignored his remark and continued to talk to Cookie everyday.

Another month passed, and then... I was passing his cage one day, and a little voice said "Cookieee!" I froze.  Did he really say his name?  I waited a few minutes, and sure enough he repeated it.  I was ecstatic!  In another 2 weeks, he learned a second word.  Then in a week, a third word.  It got to the point where he could learn a new word in a day!  After he had been with me for about 5 months, I decided to get a second bird.  I hesitated at first, knowing that there was a good possibility that he would lose interest in me and all that I've taught him if he had a friend.  But it seemed unfair for him to be alone, as birds thrive in a flock.

So another bird came home with me, and I named her Candy.
The first time he met Candy, Cookie was in a frenzy -- he was so happy to see another bird!  But would he still remain tame?  To my surprise, he did.  He continued to learn more words, even picking up phrases that I didn't intend to teach him, like "hey sweetie!"  I was amazed by his ability to mimic my speech and vocal inflections -- it was like listening to myself speak, but in the voice of a budgie!

Some words and sounds were harder for him to mimic -- the "L" sound for one.  I tried to teach him to say "chocolate" but he couldn't quite get it right, it would come out as "chockit."  But that just endeared him to me more.  Eventually, he had a vocabulary of about 50 words, but over the years, he forgot many of them if they weren't repeated to him often enough. 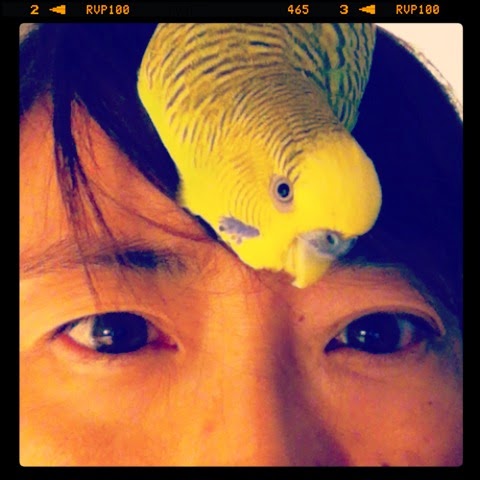 Cookie not only learned to talk, but had a playful personality.  He would often fly to me when I was at my desk typing at my laptop, or working on an illustration.  If I was on the phone, he would try to talk into the phone.  When I drank tea, he would try to sit on the edge of the cup and drink it with me! 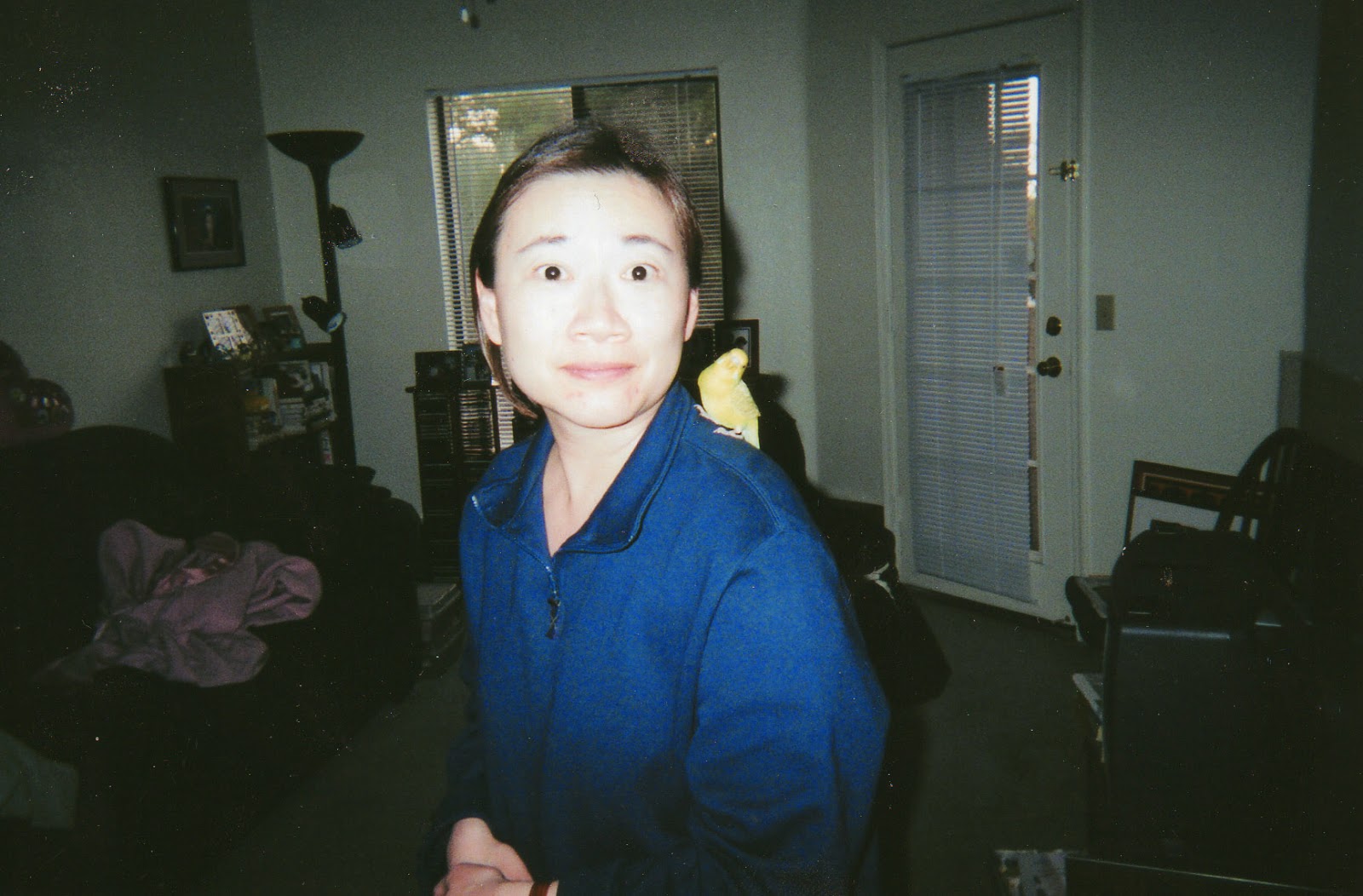 Years passed and both Cookie and Candy remained happy and healthy, until the summer of 2013, when I noticed that Cookie just didn't seem like his usual self.  It was very subtle, but something just seemed... off.  I knew that small birds hid illnesses very well -- in the wild a sick bird is an easy target for predators, and can also be abandoned by their flock.  I took Cookie to the vet, and sure enough, he had an infection.  For 2 weeks I gave him a piece of fruit with some medication on it (he ate it unsuspectingly) and the infection went away.  I felt relieved, but knew in the back of my mind that at 10 years old, both of my birds were now senior citizens.

Christmas came, and I went away for the holidays.  Sometime after New Year's Day, I noticed that Cookie was shaking slightly.  My heart sank -- I knew this was not a good sign.  The day before my birthday, I took him to the vet, and my fears were confirmed -- he had an infection again.  The vet suspected that he probably had an underlying illness that was causing the infection to return.  We went home with more medications, but Cookie wouldn't eat it off the fruit like last time.  He just turned his head when I tried to feed him.  So now I had to give him the medication through a dropper, which he resisted.  My husband held him down and I tried to drop it down his beak, but he became hostile and bit me.  It wasn't hard enough to break my skin, but hard enough that it alarmed my husband.  At that point I backed off giving him the medicine, and knew that he probably didn't have much time left.  I just tried to keep him happy and comfortable the best I could.

The morning of January 10th, I uncovered his cage, and he was sitting on the lowest perch with his eyes closed.  I knew in that instant that he most likely wouldn't make it through the day.  As I was leaving for work, I called his name twice.  The second time, he opened his eyes for a second, looked at me, then closed his eyes.  That was the last time I saw him alive.  About an hour and a half later, my husband called me at work to let me know he was gone.

It was a Friday, and I cried all weekend.  I had him cremated, and he came home in a tiny urn.  I made a spot for him on my dresser, and surrounded it with little religious icons I had collected over the years -- both Buddhist and Christian.

A year later, Candy is still with me and I have a new bird named Bacon.  Although I love both of my birds, Cookie will always have a very special place in my heart. 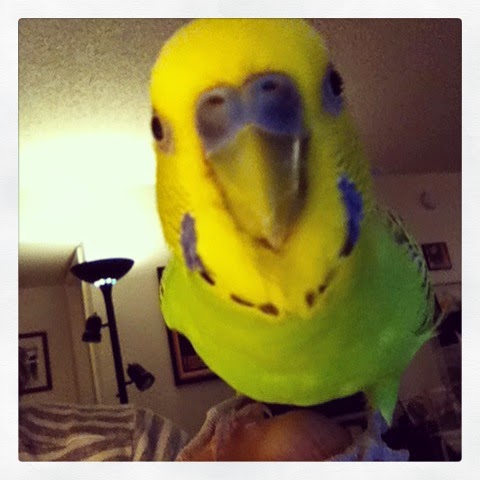 Goomie
Painter/Illustrator. Mother of budgies! All artwork © Megumi Lemons and shall not be used for any reason without permission. Thank you!